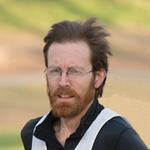 Tim Decker is a USATF, RRCA and VDOT O2 certified running coach. He has run the Boston Marathon
every year since the 100th running in 1996. The 122nd Boston Marathon on April 16, 2018 was Tim’s 23rd
consecutive Boston and 180th marathon overall.

As the BQ Marathon Coach, Tim leverages that Boston streak and 11,000+ miles of racing experience to help runners whose primary racing goal is to qualify for the Boston Marathon.

Here are some highlights — and in fairness, a few humorous lowlights! — of Tim's 33-year long distance running career:

• Tim's first race was a two mile fun run on the evening of August 7, 1984 in Albion, PA. He wore denim jeans.
If you show up for a workout in jeans after reading this, Tim might let you run anyway but he will quietly laugh at you to himself.​

• Upon entering his first marathon at the age of 17, Tim had only run as far as a half-marathon. He walked most of the second half.
A friend of Tim's once famously asked, "What's the challenge of running a marathon if you've done all the training?" While that Yogi-esque quote has charmed many over the years, Tim won't let you do what he did. (And foolishly still does on occasion...)

• Tim once allowed an athlete to bribe her way into completing a tough hill workout by granting her permission to have french fries afterward from a well-known fast food chain if she made it up the 1/2 mile hill with 250' of climb for the 7th time. (A couple weeks later, that athlete beat her work colleague rival in that year's Corporate Challenge, thereby winning their "anything" wager.)

While Tim is still willing to employ creative methods to get the job done, that isn't likely to work again. Attempt at your own risk!

• Tim was winning the 1994 Yellowknife Marathon until mile 16, when he bonked because his energy bars were too frozen to eat.

Lesson: If an energy bar or gel is your margin of error in a marathon, you've failed miserably well before toeing the starting line.

• 3:25 in the 1996 NYC Marathon, two days after finishing a 100-miler in Prudhoe Bay, AK in –40°F wind chills, his red-eye fight to LGA arriving so late that he had to run across the Verrazano Bridge from Brooklyn to Staten Island to get to the start on time.
Tim is not likely to be too sympathetic to your excuses for ever missing a race start!

• 8:28 in the 2003 NYC Marathon — Tim exited the course at mile 5, traveled to Hastings-on-Hudson in Westchester County, won the Terry Ryan Memorial Run 10K in 38:05, returned to the same corner where he exited the marathon course in Brooklyn and rejoined the NYC Marathon, making that year's official finisher cut-off time of 8:30 by less than two minutes.

Tim failed when first trying to pull this off in 2002. Needless to say, he can be a bit stubborn. He will make you try again, too!

Yeah, Tim can be a whole lotta crazy. But you're going to want that on your side if you want to Catch the Unicorn!™